Sandeep Nath is best defined as an Inner Power Coach because his interventions result in people rising to – and sustaining – higher potential.

His speaking style quickly engages audiences and individuals to change and think differently. He is thought-provoking, insightful and direct. Participants on his events – whether online or offline – feel compelled to take action.

He is a master in establishing the link of health, purpose and productivity with the energy required of a leader. And he makes managers self-motivated to use this energy to decrease stress, increase customer delight, empower teams and improve work-life balance.

Since 2006, Sandeep has worked with thousands of individuals across 4 continents and has conducted workshops at over 25 nationally-reputed centers. On Google, he owns the front page for “Sandeep Nath Success”, having authored Arrive At Success.

In June 2020, he released his second book titled RENEWAL, on elevating human consciousness through small changes in individual habits. And turned into Broadcaster & Anchor of The RENEWALism Show, which ran 36 daily episodes viewed by over 60,000 people online in its first season. RENEWAL ran into its 2nd edition and a US-based publishing house has requested for a sequel. Together with several global entities, the RENEWALism Movement is currently underway.

Sandeep collaborates with a wide range of global organizations and provides them with a competitive edge based on his unique understanding of how the world works.

His intervention success is based on his belief that behavior is an outcome of thinking. And to bring individuals into action you have to work on their thought-perception, which is easily achieved through working on habits. Sandeep’s methodology can quickly move hindering habits into profitable perception, providing the spark needed to reset the mindset of your organization. 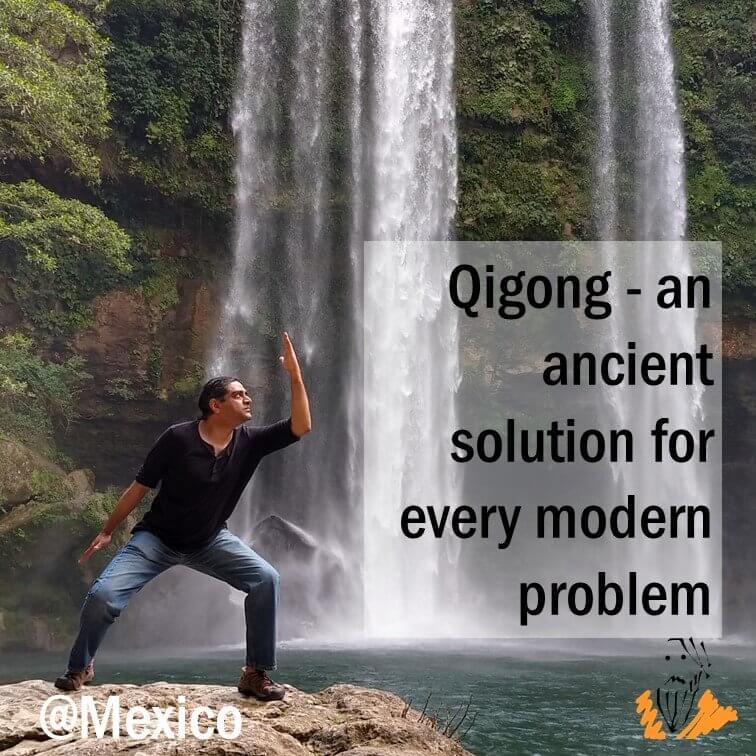 The man behind the myth of Guru Pranachandra

Since Sandeep is passionate about raising human consciousness, he believes that the world is a mere 30 habits away from Renewal, as documented in the book RENEWAL.

This book, he says, was conceived by Guru Pranachandra, who is a form of energy that channeled through Sandeep’s mind and hands… as he penned the 240 pages on simple habit-switches that will raise human consciousness.

Not one to be swayed by arbitrariness, with his IIT-IIM education, Sandeep went to live in the Himalayas to learn how ancient energy wisdom awakens our Inner Power. He is also a Reiki Master, Qigong Instructor, Mindfulness Coach, and Tibetan Buddhist.

To provide background into his story, while he ran a successful consulting company since 1997, around 2005 he began to be disturbed by existential questions. His largest multinational clients, it seemed to him, were creating more problems than they were solving for the world. And that got him to turn to Vedic gurus in search for answers about purpose and consciousness.

This led to an understanding of how energy moves all of us, and by 2010 he handed his company over to the other Directors and moved to the Buddhist monasteries to deep dive into personal energy and the body-mind-spirit from Tibetan lamas. With his knowledge of Qigong and Reiki, from Chinese and Japanese masters, he put together what he calls Inner Power Programs, to apply ancient oriental wisdom to reverse modern business and lifestyle challenges.

Meanwhile, between 2011 and 2016, Sandeep pursued his purpose of creating impact outside the corporate world by empowering micro-entrepreneurs and women in rural India. He has walked in over 500 villages and set up banking facilities over the cloud, solar power centers, and innovative micro-financing models for solar energy.

Since 2016, together with his wife (who is from Mexico and is also a Buddhist and Energy & Meditation Coach), he became sought-after from Europe to New Zealand, for his talks and open workshops on Energy, Mindfulness, and Powering Personal Potential.

As he uniquely stands at the cusp of modern and ancient methods of leadership, productivity, and organizational alignment, since 2021 Sandeep has narrowed his focus on empowering organizations to reframe and realign people-process-purpose through wisdom embedded in the methods of RENEWALism.

1000 Words... All you wanted to know about your next Speaker